I have a bad habit, I know, of telling you guys about places that are not real easy to get to. Places that, while integral to the history of Matsumoto, can be a bit out of the way for the time- and transport-constrained traveler.

So today let’s make a quick trip on foot, to a spot right across the street from the castle.

No, not the convenience store. Well yes, there is a Family Mart opposite the castle’s main entrance on the south side of the grounds. And to the east, across from the historically-accurate Taiko-mon Gate is the architecturally-uninspiring City Hall building. Then there are the sprawling gravel parking lots to the west.

No, today we’re heading for the north side of the castle, to one of my favorite not-on-top-of-a-mountain pieces of Matsumoto’s history. 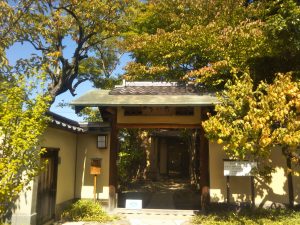 The Man Behind the Mansion

To be clear, there’s no mansion. Not in any western sense of the word. But the residence that Kisaku Ikegami built here in 1958 is called, in Japanese, a ‘teitaku’ (邸宅), which basically means ‘a really big place to live’. Considering Japanese standards when this place was built, “mansion” is probably as good a word as any. 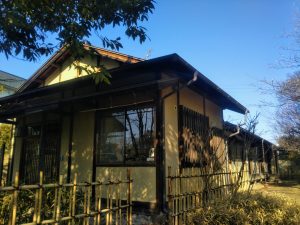 Kisaku Ikegami was the oldest of seven children, born in 1890 to a successful businessman who ran a shop in Ise-machi, in present-day downtown Matsumoto. Kisaku would eventually take over the shop while pursuing his interests in the literary arts, particularly haiku and other forms of poetry. Influenced by the work of famed haiku poet Masaoka Shiki, Ikegami built his mansion (ahem) not only as a place to live but a place where he could spend time with the writers of the day as they exchanged ideas and deepened their art and their community.

There is usually (but not always) someone there in the front room office who will let you take a mini tour of the place. Just offer a smile and a subtle bow and say “Konnichiwa. Chotto mite (“mee-teh”) mo yoroshii desu ka?” (Translation: “Hi, mind if I take a quick gander?”) The effort will likely win you both a dose of social grace and a deluge of Japanese from the person who will think you speak Japanese. Enjoy! 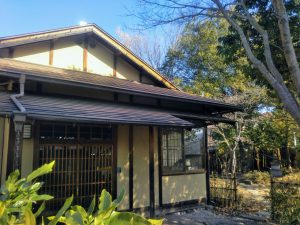 Ikegami’s home is an attractive example of traditional Japanese living, and is largely intact as it was when he lived here. Note the imperfections in the glass of the windows and sliding doors along the corridor. This glass is the original stuff. Don’t trip. 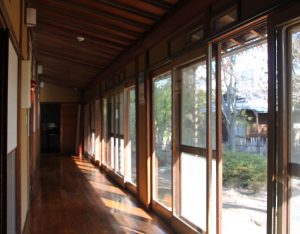 The obvious reason for all the glass is the garden of stone walkways, the groves of bamboo, and the deliberate and seasonally-spectacular display of flowering, fruit-bearing trees. Viewed from the rooms and the hallway of the teitaku, the overall aesthetic is exquisitely Japanese. As you step easily along the pathways of the garden, winding your way among the trees and the bamboo, you may feel you’ve traveled much farther than across the street from the castle. 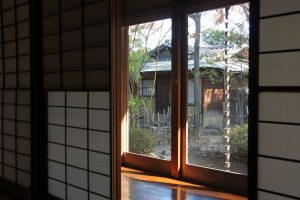 The most alluring aspect of the Hyakuchiku-tei, however, is the relatively diminutive structure tucked back in the far corner of the garden. At a glance it could easily be mistaken for a shed (albeit a nice one). A closer look shows that it was something much more. 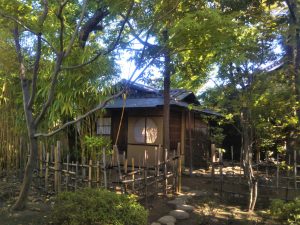 In 1958 Ikegami commissioned a carpenter specializing in cha-ya teahouses, along with the services of a joinery shop in Kyoto, to build a cha-ya for the teitaku. Wanting to create a garden of commensurate appeal he sent a crew of men to Kyoto to study the art of Urasenke, one of the three main schools of Japanese tea ceremony and the source of cha-ya landscaping traditions. The result is what we see today.

As soon as you step through the gate into Ikegami’s Hyakuchiku-tei a “tobi-ishi” (stepping stone) path leads you past the house, into the garden and toward the teahouse, passing along the way a few relics of Kisaku Ikegami’s life and inspirations. 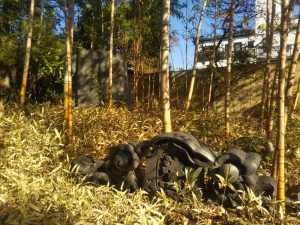 A triangular roof ornament sits in the grass, bearing the Ikegami family name in Kanji. This was, my accidental guide told me, an original piece of teitaku history. Standing among the bamboo behind this is the Meiji Centennial Memorial (erected in 1971, three years too late). This stone doubles as a memorial to Ogiwara Seisensui, a haiku poet who lived at the same time as Ikegami and promoted a radical style of haiku that abandoned all rules of content and meter (in complete opposition to the traditional style of haiku preferred by the aforementioned Masaoka Shiki). Seisensui actually paid Ikegami a visit here in 1964, and is said to have returned every year until his death in 1976.

Over to your right (if you are still looking at the Meiji Centennial / Ogiwara Seisensui monument), in the corner of the garden closest to the street, stands a tall rectangular stone called the Kotobuki-toh. In 1974 Kisaku offered to build a memorial for Seisensui – not to try to hurry Seisensui toward his demise but rather to allow him to decide what he wanted written on it. Kisaku thus crafted the Kotobuki-toh, a tall rectangular stone on which Seisensui inscribed, in the shapes etched on the face of the stone, the characters 無、何、有、寿 – which translate roughly as “Longevity/Happiness that is found nowhere else.” This is the sentiment that was in time written on the “gorin-toh” that stands in central part of the garden as Ikegami’s memorial to one of his greatest inspirations. 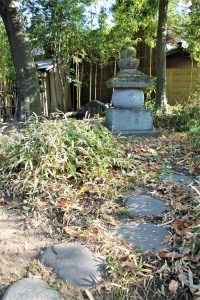 Continuing along the stone path takes you through the gateway of a fence that harkens back to the days when life in Japan was built around wood and bamboo. Beyond this fence the tobi-ishi leads to the right, over to what could have passed for a bus stop back in the Edo Era (if, of course, they’d had buses). 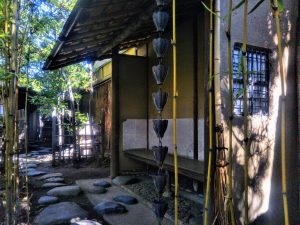 This “koskikake-machiai” served as a waiting place for visitors to the teahouse. The bamboo directly in front of you when you sit on the bench is a deliberate aspect of the koshikake, meant to provide a sense of intimacy, offering conceptual separation from the main teitaku building.

The outhouse to the side offers a different air of privacy. 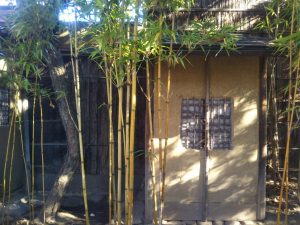 From the koshikake the tobi-ishi path leads through another timeless fence, past a “tsukuboi” wash basin and up to the tea house and its traditionally-tiny entrance. There are two or three more or less human-sized entrances to the tea house, but guests enter through this small square opening called a “nigiri-guchi”. Long a part of tea house tradition, this undersized entryway is designed so that whoever enters the tea house, from the emperor to the lowly wood gatherer, must duck down in a show of humility. The idea is that here, everyone is equal. 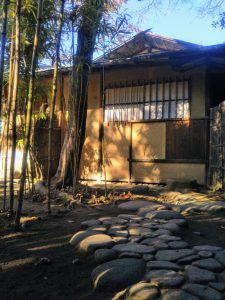 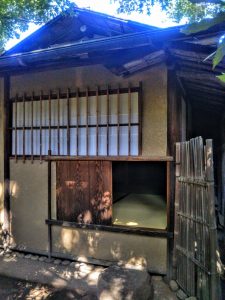 There’s no guarantee that the tea house will be open for viewing, but if there is anyone around they may open it up and let you take a look. The interior is, in the traditional Japanese sense, simple. One interesting thing to note, however, is the ceiling. The bamboo slats (strips?) are woven in an overlaid fashion to represent (as I was told) the manner in which the tea master folds her hands on the straw tatami mat floor as she kneels and bows to her guests.

In 1995 the Ikegami residence was donated to Matsumoto City to contribute to the advancement of art and culture beyond poetry and writing, opening as such the following year. To this day it is used for tea ceremony lessons and exhibitions while serving as a social education facility for the purpose of promoting local culture, providing a place for lifelong learning. 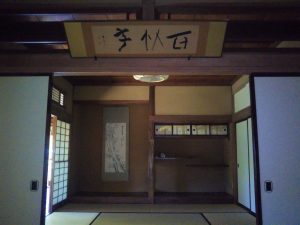 Hours of the Hyakuchiku-tei garden generally coincide with those of the building – namely 9:00am – 9:00pm (closed Mondays). As close as this quiet escape is to the castle and the rest of downtown, it doesn’t take much to scoot on over to see if the gates are open – and if there is anyone around to hear you rock out your newfound Japanese skills.

Enjoy your slice of serenity.

HOME BlogA Slice of Serenity Next to the Castle: Ikegami Hyakuchiku-tei